Dear Dr. Florin, representatives of the Romina Mineralbrunnen GmbH, Prof. Fortágh, Prof. Conard and colleagues of the Institute for Early Prehistory and Quaternary Ecology, and Anna’s friends who are joining her award ceremony digitally today.

We are pleased to welcome all of you today. As in previous years, the 2021 Tübingen Prize for Early Prehistory and Quaternary Ecology is awarded for innovative PhD research among young scholars studying Ice Age archaeology, Quaternary ecology, and human evolution. But for the first time, this 23rd Tübingen prize is bestowed on a young researcher in the field of archaeobotany, thereby certifying the excellence and extraordinary range and extent of Dr. Anna Florin’s work. 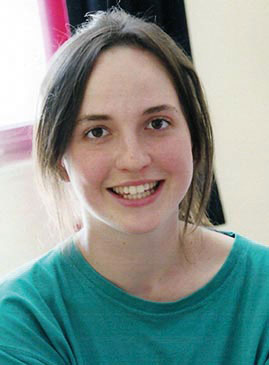 Our laureate, Dr. Stephanie Anna Florin (Fig. 1), is currently a research fellow at the Australian Research Council Centre of Excellence for Australian Biodiversity and Heritage at the University of Wollongong. She completed her outstanding PhD research at the School of Social Sciences at the University of Queensland in the summer of 2020 and was recently offered a research fellowship at Cambridge University, where she will be starting this October. Congratulations on this achievement as well, Anna!

Before introducing Anna’s PhD research, in which she investigated changes in diet and the use of the landscape at Australia’s oldest known archaeological site, Madjedbebe, I would like to say a few words about how she was first attracted to topics such as hominin evolution and dispersal and tropical archaeobotany.

Since Anna Florin was always fascinated by modern and ancient history, studying archaeology seemed to be a natural progression and motivated her to begin her studies at the University of Queensland, where in 2013 she received the University Medal for sustained academic excellence above and beyond the requirements of her degree.

She soon recognized that she enjoys engaging in the entanglement of science and theory in archaeology. She took the opportunity to join one of her later thesis advisors, Prof. Andrew Fairbairn, in archaeobotanical fieldwork at the Epipaleolithic site of Bonçuklu Höyük in south-central Anatolia, where Anna fell in love with the beautiful, charred seeds and grains that all archaeobotanists adore.

Soon aer these inspiring experiences, she delved into Australian Archaeology and started fieldwork at the famous Madjedbebe site with Prof. Chris Clarkson and his colleagues. With her interest in commensality and its fundamental role in human culture, she began extracting plant remains from the sediments at the site and, at the same time, studying the ethnobotany of the region. is helped her to build the necessary comparative collection from scratch, which up to that point had been mostly limited to nutshells of Pandanus. It cannot be overemphasized that archaeobotany relies heavily on morphological identification and that the quality of the comparative collection determines the significance of the archaeobotanical research output. Starting with no suitable comparatives to the plant remains from Madjedbebe, Anna made every effort to successfully overcome that hurdle. With support provided through the Wenner-Gren Foundation and several other grants, she managed to establish her own ethnobotanical fieldwork, working in a remote Aboriginal community of Mirarr country, where she found supportive friends in two elders of that community. Apart from collecting plant remains from food processing, Anna applied SEM photography to diverse parenchymous tissues to succeed in taxonomically identifying an impressive number of different fruits, nuts, roots and tubers for the first time in archaeobotany.

Aside from her amazing PhD research, Dr. Florin is an experienced and captivating lecturer, which she has demonstrated in diverse talks on Australasian Archaeology and her numerous conference contributions and invited lectures. She also worked with the Max Planck Institute for the Science of Human History at Jena, conducting archaeobotanical analysis at early occupation sites in the dry zone in Sri Lanka. In addition, Anna has received a number of prestigious grants in support of her research, as well as numerous achievement grants both within and beyond the university. Her publications can be found in well-reputed journals including Nature, Nature Communications, Annals of Botany, and the Journal of Human Evolution, to name just a few.

Since you will soon experience for yourselves what makes Dr. Florin’s research stellar, I will mention only briefly some of the numerous aspects that convinced us of the extraordinary scientific quality of her work.

Apart from her extended and outstanding ethnobotanical efforts, which did not stop at collecting modern plant reference material with the Mirarr Traditional Aboriginal Owners but included as well the recording of plant food-processing sequences and post-encounter return rates, Anna identified plant remains preserved in diverse forms, including seed fragments, phytoliths, and parenchymous tissues.

She also applied stable isotope analysis of ancient and modern Pandanus nutshells to produce an onsite proxy for palaeoprecipitation over the past 65,000 years, with the aim of linking observed changes in subsistence with local environmental events, including the Last Glacial Maximum, rising sea- levels, and the redistribution of vegetation communities. To make this feasible, she acquired a grant with the Australian Institute of Nuclear Science and Engineering.

Dr. Florin’s work has a sustainable impact on our understanding of early modern human dispersal outside Africa and, in particular, of the role and nature of plant subsistence in these early hunter-gatherer economies.

Dear Dr. Florin,
it is my great honor and pleasure to thank you for your highly significant scientific contribution and to congratulate you on behalf of all of us on receiving the Tübingen Prize for Early Prehistory and Quaternary Ecology (Fig. 2). We are looking forward with excitement to your future discoveries. 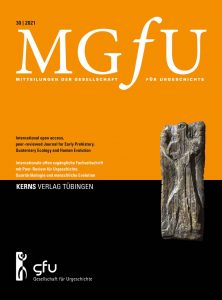