Ofer studied from his BA through his PhD at the Hebrew University, a University with international aspirations founded in 1925 with the guidance of Albert Einstein, Sigmund Freud, Martin Buber, and Chaim Weizmann. Archaeology found an important place within the Hebrew University, forging a key foundation for the modern Jewish attachment to the Land of Israel. When Ofer began his undergraduate studies in 1960, the dominant figure in the Institute of Archaeology was Yigal Yadin who had followed up a career as Chief of Staff of the Israel Defense Force with a doctoral dissertation on the Dead Sea Scrolls and a turn to archaeology. Prehistory at the Hebrew University was the domain of Moshe Stekelis, a Russian-trained archaeologist who spent three years of exile in Siberia (where he is said to have continued his studies) before immigration to Palestine in 1928. Ofer excavated with Stekelis at Nahal Oren, Ein Gev 1, and ‘Ubeidiya. He published his first archaeological paper in 1963 on excavations with Baruch Arensburg at the Lower Paleolithic site of Emeq Refaim in Jerusalem. Arensburg eventually moved into physical anthropology and remained a long-time collaborator.

Ofer’s dissertation, completed in 1970, was a study of the Epipaleolithic period largely based on the analysis of collections from sites along the coastal plain of Israel. For his dissertation Ofer adapted the typological method developed by François Bordes to the Epipaleolithic in a manner similar to Jacques Tixier’s work in North Africa. The collections Ofer analyzed were from his own fieldwork but also from the collections of amateur archaeologists cultivated by Stekelis, including Felix Burian, Erich Friedman, and Walter Lebenstein, who were on the ground when sites were exposed as the result of construction. Ofer’s dissertation is thus a kind of bridge between the initial development of prehistoric archaeology in Israel as a popular pursuit towards the scientific archaeology that Ofer is largely responsible for developing. With his thesis Ofer also set down some of the principles of archaeological method that continued to guide his research throughout his career, particularly an emphasis on the reality of archaeological cultures as expressed by patterning in material culture.

In 1965 Ofer began excavations at Hayonim Cave and in 1967, following Stekelis’s death, he took over the direction of the ‘Ubeidiya excavation when he also joined the faculty at the Hebrew University. The excavations at both Hayonim and ‘Ubeidiya were undertaken in collaboration with the zoologist Eitan Tchernov. The partnership of Ofer and Eitan is one of the great stories of archaeology, a true meeting of minds. During the 1970s and 1980s Ofer seemed to have been permanently in transit between the university and the field with projects in the Sinai (notably at Jebel Maghara with James Phillips); Qafzeh (with Bernard Vandermeersch); El Wad (with François Valla), Kebara (again with Vandermeersch), Netiv Hagdud (with Avi Gopher), Nahal Hemar, and then in 1992 back to Hayonim. At the same time, he was training a new generation of Israeli prehistorians including Uri Baruch, Anna Belfer-Cohen, Isaac Gilead, Avi Gopher, Nigel Goring Morris, Naama Goren, Erella Hovers, and Dani Nadel. In 1988 he moved to Harvard University to take up the George G. and Janet G. B. MacCurdy Chair of Prehistoric Archaeology. At Harvard his students included Dan Adler, David Cohen, Güner Coşkunsu, Ian Kuijt, Dan Lieberman, Carolina Mallol, John Shea, Gilbert Tostevin, Bastien Varoutsikos, and Shoh Yamada. This list of students gives only a small sense of Ofer’s role as a mentor as he worked with many students and younger colleagues including (in only a very partial list) Meten Eren, Yossi Garfinkel, Liore Grosman, Radu Iovita, Steve Kuhn, Greg Layden, Tal Simmons, Lynn Schepartz, Nicola Stern, Mary Stiner, David Strait, Aaron Stutz, Martha Tappen, and Kathy Twiss. Another group is made up of the collaborators who came to develop a strong synergy with Ofer, including Paul Goldberg, Liliane Meignen, Bernard Vandermeersch, and Steve Weiner (Fig. 2).

So, the question is, how was this all possible? I will note Steve Kuhn’s theory that Ofer actually had a secret twin brother allowing him to literally be in two places at once. But setting doppelgangers aside there is also the yellow van that was for years the key piece of equipment in Ofer’s field projects. The story I heard was that in 1977 Ofer had Richard Dreyfuss’s father as a volunteer on a field project in Sinai and made arrangements for a satellite phone to make it possible for the father to offer his son congratulations for his Oscar Award. Subsequently when Ofer realized he needed a field vehicle, he contacted Richard Dreyfuss’s father and asked for financial help, leading to the acquisition of a vehicle that rendered extraordinary service to archaeology. It is worth noting that another factor might be that Ofer did not drive, perhaps a secret of success.

On a more serious note, I think that Ofer had a charisma that drew people to him along with the uncanny ability to identify talent and to draw the full potential from people. My personal impression is that Ofer grew out of the culture of the early years of the State of Israel which thrived on an egalitarian ethos where everyone, regardless of their position in the hierarchy, was expected to think for themselves in order to achieve results with minimal resources. Ofer’s fieldwork was thus a collective effort, but a collectivity where he was quietly devising the strategy that pulled it all together. Ofer was a shrewd field strategist capable of thinking through objectives and how they could be most quickly attained.

A second trait of Ofer’s that impressed me was his ability to listen to and adopt the knowledge and skills others brought to the table. He quickly recognized the value of Paul Goldberg’s use of micromorphology, Liliane Meignen’s adoption of the chaîne opératoire for lithic analysis, Helene Valadas’s OSL dating, and Steve Weiner’s use of FTIR.

I got to know Ofer working with him for two seasons at Kebara Cave and although we never collaborated directly (a personal regret) he continued to support me at every stage of my career, while never holding back when he thought I was wrong about something. At Kebara Cave I experienced a new kind of archaeological enterprise where experts and students worked side by side, where the lab dissolved into the field. The pleasure of this fieldwork was visceral and flowed from a sense of camaraderie. As a first year PhD student it was a surprise to hear each day Liliane Meignen’s French inflected Hebrew announcement that ‘hamayim rotchim bakoomkoom’ (the water is boiling in the kettle) and Ofer’s pleasure in repeating his bilingual joke about the box of ‘petit beurre gadol’ in which the French description of the cookies as little clashed with the Hebrew description of the box as big.

After moving to Harvard Ofer’s horizons expanded to include research in the Caucasus Mountains and in China, both enterprises where his accomplishments were the equivalent of many careers. Ofer was truly one of the great archaeologists of the Twentieth Century. It might be more accurate to say that he was both a great archaeologist and prehistorian, because unlike many of his peers, Ofer continued throughout his career to conceive of prehistory as a historical process. I think that his grounding in the early years of the development of archaeology in Israel, dominated by figures like Yadin and Yohanan Aharoni, continued to shape his thinking. From another perspective, Ofer merged the insights of V. Gordon Childe with a dedication to methodological innovation. The two men were quite different. Childe was politically engaged as an orthodox Marxist. Although Ofer had opinions on almost any topic, a commitment to a political party, or for that matter any kind of orthodoxy, was not really apparent. And yet both were compelling writers who understood at a gut level the importance of a good story. They also shared an incredible capacity for both visual and numerical memory. Ofer seemed to be able to remember the age and stratigraphy of every relevant site from France to China and my impression is that his essential task was to make order out of this vast quantity of information. Like Childe he was determined to fit it all together, and cultures played a critical role for both as the building blocks of history.

It is intriguing that both Childe, the transplanted Australian who always seemed a bit out of place in the lofty reaches of British academia, and Ofer, the native born Israeli who never seemed to truly fit the mold of Harvard University, were passionate about revolutions. Ofer succeeded in fundamentally reformulating both the Neolithic Revolution and the origins of Modern Humans. For a number of years, he was engaged in reading about the industrial revolution and saw a direct relevance of the recent transformations of human societies to the substance of prehistory.

Ofer was neither a Processualist nor a Postprocessualist, although his experience at the University of Michigan and friendship with John Speth might have pushed him towards the Processual end of the spectrum. In keeping with his cultural background, Ofer had little interest in theory devoid of substance, yet his career adds up to a lengthy argument that there is an objective history of humanity and that through active fieldwork and the adoption of rigorous scientific methodologies we can explore this past and draw its outlines. One Hebrew expression he often used was ‘lech da’ the imperative, go know.

Ofer’s death is a great loss, but many of us will be walking in the path he laid out for many years to come. I want to express my condolences to his wife Daniella Bar-Yosef and his family. Ofer, like his Jerusalemite contemporary Yehuda Amichai, was able to draw on an understanding of the past as a human story. As Amichai writes in response to looking at the sieved dirt piles on an archaeological excavation, “this dust is people like us.” 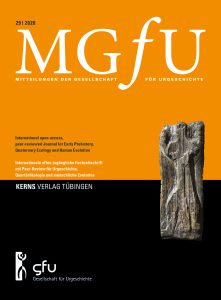